As one of the most experienced general surgical practices in northern Florida, we have seen an amazing transformation in surgical technique over our careers. It began with open surgery, the tried-and-true method that withstood the test of time for centuries. In 1910, daring surgeons performed the first laparoscopic procedure on humans. Over the next decades we began to perform relatively routine procedures with minimally invasive tools. Laparoscopy, using a miniaturized camera and long-handled tools became the gold standard for almost every surgery we perform. 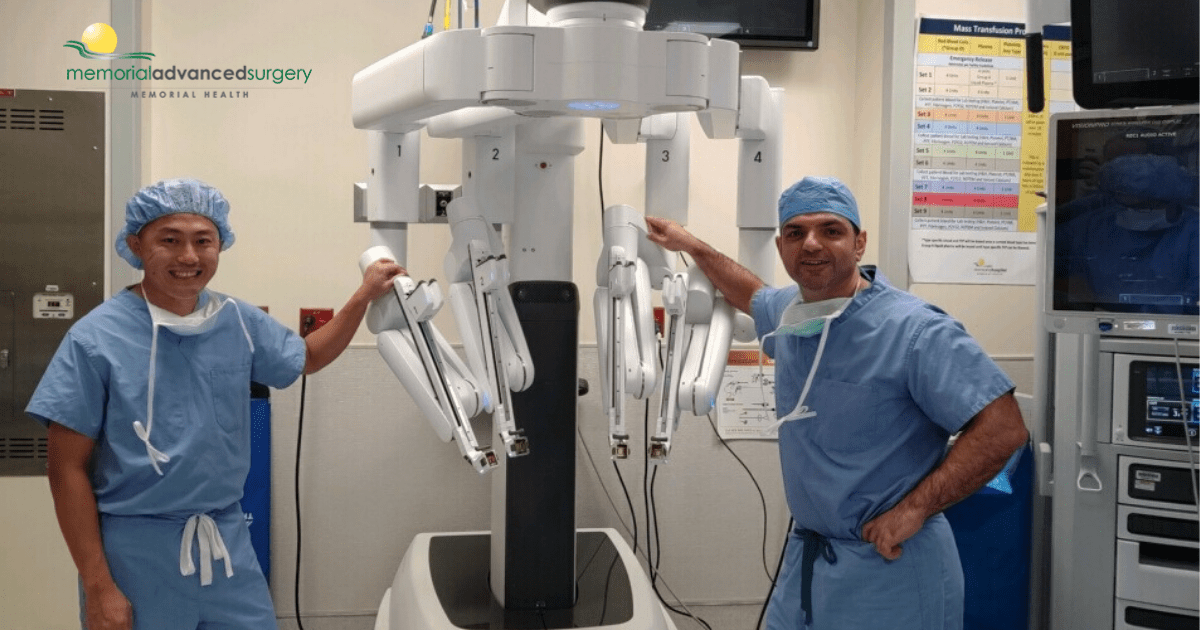 In the early 1990s, robotic surgery was introduced. What we use today – the da Vinci Surgical System was introduced late in the decade that allowed us to fully control robotic arms that mimicked what we do in traditional laparoscopy.

In the beginning, many of us were skeptical and wanted to see definitive proof that we could perform safe and effective procedures with the robot. It became clear, early on, that robotic surgery could offer as good, if not better results.

Despite the significantly higher cost of equipment, training and maintenance, today, robotic surgery is slowly becoming the new standard for almost every procedure that can be performed laparoscopically and even some that in past could only be performed open. Why?

First, as surgeons, we value flexibility and range of motion. With traditional laparoscopy, we had to compromise for the sake of fewer postoperative complications when we transitioned away from open surgery. With the advent of robotic surgery, we no longer have to choose because we get all the flexibility of an open surgical procedure with the minimally invasive nature of traditional laparoscopy.

Second, one of the most grueling parts of laparoscopy was having to stand next to the operating table looking up at a TV screen while performing the procedure. It meant that surgeon fatigue was a serious problem, especially on days where long procedures were called for or we had several surgeries scheduled. With robotic surgery, we sit at and look into a console in the same room as the patient, using more natural motions and normal body posture. This reduces fatigue and improves both efficiency and safety.

Visualization of the abdomen is always a significant concern when performing surgery. There are many delicate structures within the abdomen mere centimeters from where we are performing the operation. With traditional laparoscopy, we were limited to poor depth of field because of the two-dimensional nature of the TV screen. However, the robotic system gives us an immersive 3-D experience that allows much better depth perception and better visualization.

As to the cost and timing of the procedure, there is a slightly increased cost as well as longer surgical times when using the robot. However, over the years we have improved efficiency to where these are not significant enough to affect patient choice or outcomes after surgery.

To be fair, there are times where robotic surgery does not make sense. The robotic platform does not offer appreciable benefits in very simple and straightforward surgeries like a gallbladder removal. And since OR time with the robot is limited, traditional laparoscopy is often best. Further, some procedures, especially in patients who are severely obese, who have a very thick abdominal wall or have scar tissue because of a prior abdominal surgery, may require an open procedure. While rare, conversion to an open procedure may be necessary whether we start it robotically or using traditional laparoscopy.

In the end, while the robot does seem fancier and flashier, there is substance behind its use. Each of our surgeons is trained to use the robot at the highest level, however we will discuss the appropriate procedure for you during your consultation. Most importantly we want to ensure the safest and most effective procedure each and every time, regardless of what methods we used to achieve that.

You can learn more about our program and understand the treatment options for the condition that you may be suffering from by contacting us for a consultation. Should you be considering bariatric surgery, we now offer free e-consultations through our new telehealth portal.

Memorial Advanced Surgery
3627 University Blvd S. Suite 700, Jacksonville, FL 32216
(904) 399-5678 | Get Directions
Check Insurance
Please fill out the form below and we will contact you to help you verify your insurance benefits!